The IES Illumination Awards are presented by the IESNA (Illuminating Engineering Society of North America), which is more than 100 years old. It is one of the most authoritative and oldest in the history of lighting design awards in the world. It represents the highest design level in the world. The IES Lighting Awards are created to provide an opportunity for public recognition of lighting design projects that demonstrate professionalism, intelligence and creativity. The awards are divided into the final Award of Distinction, Award of Excellence, Special Citation, and the Regional Award for Primary Selection ( Section Award) and Award of Merit. In the morning, Mr. Xu Haisheng, the manager of International Trade department for Hangzhou YD Illumination Co., Ltd., rushed back to the headquarters of company in Hangzhou in order to share this joy. This also means that China's lighting industry has achieved remarkable results under the joint efforts of lighting colleagues, and has been recognized and affirmed by international lighting society. 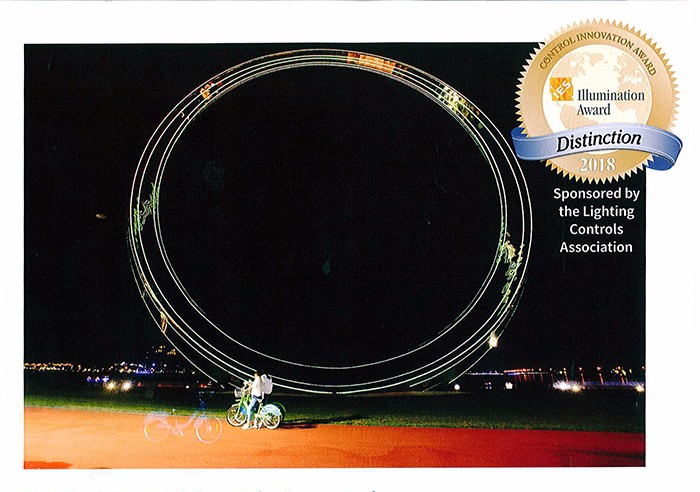 Sakura Lake Love is a ring sculpture located in Weihai Sakura Lake Sports Park. The sculpture is 42 meters high and carries the architectural aesthetics based on traditional Chinese hemispherical dome cosmology. It is located beside the long seaside and blue sea. It has a ring shape and is wrapped in stainless steel. It is magnificent and stands on the shore of the Sakura Lake, giving people a sense of strength. On the inner groove of the sculpture, 12 light strips consisting of a custom-made double protection of 70 linear lights are installed. The light belt is laid along the circular contour. After the night falls, the sculpture transforms into a huge animated colorful ring. In the park and beyond, it becomes an important focus point for tourists.

Sakura Lake Sports Park combines the original ecological environment with modern facilities to provide a diverse sports experience for the public. In the sculptural light presentation, the sport of riding bicycles is also used as a carrier to create the interaction between people and lighting effects. The sculpture lighting fixtures have built-in interactive control system, which is connected with the bicycle. The system can change the rate of pedaling into a control signal through the sensor to change the light embedded in the sculpture. The lighting effect changes with the speed of the rider. The 12 bicycles on the spot can be divided into three modes: cooperative mode, single player competition and group competition. Each bicycle controls a single strip of light to control the changing of light. The faster the speed changes, the faster the light changes, the different colors of each strip are used to distinguish the participants, When the winner is first to hit the destined place, all light colors will change into winner’s color. The interactive mode, similar to tug-of-war, 12 bicycles are divided into 2 groups, each group of 6 people, the control lights changes from the bottom upwards. The first group controls the lights in clockwise direction and the second group controls the lights in counterclockwise direction. the faster the speed changes, the faster the light changes. When the two sets of lights meet, the direction of the light flow is determined according to the speed of both sides, and when the winner reaches the end, the winning picture will appear.